The Research and Conference Centre which belongs to the Polish Academy of Sciences is located in Będlewo, 30km southwest from Poznań (2km from the Poznań-Wrocław route). Our palace borders on the Greater Poland National Park. Undoubtedly, the proximity of lakes and forests is a great advantage.
Będlewo Palace was built in a neo-Gothic style from 1866 (the architect is unknown). The interiors of this palace were renovated in 1980s. Both the courtly outhouse and the high-tech part of the palace perform lodging and conference functions. 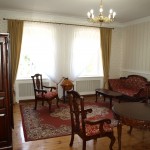 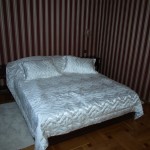 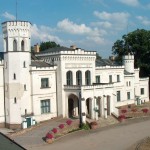 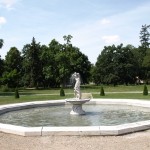 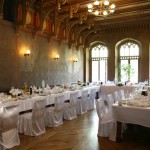 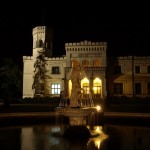 HISTORY
The first mentions about Będlewo came from the end of XIIc. The Łodziów nation whose descendants called Będlewscy ruled. The situation changed in the following centuries. In XVIIc. Będlewo was ruled by Potoccy so called Greater Poland branch of Potocki family. In 1851 Józefa Potocka funded a chapel in the parochial church in Łódź. Bolesław Potocki (1861-1898) was an outstanding owner of Będlewo. He ruled for 37 years and enlarged the properties which consisted of Będlewo, Wronczyn, Dymaczewo, Zamysłowo, Srocko, Wojnowice, Dakowe Mokre, in total 4.728ha. Potocki was the founder of the KLIWECKI, POTOCKI I SKA Bank. Besides, he was the member of the Theatrical Committee and dedicated the area to Polish Theatre Sp. So that they could build the theatre. In 1866 the Palace in Będlewo was renovated. The manor house with thatched roof was built first.
When we enter the palace we can see a beautiful hall with an authentic floor, wooden banister with Potocki armorial bearings. On the left there is the biggest chamber called Knightly one. On the walls there is the grey polichromy with Potoccy armorial bearings and Pilawa armorial bearing with the letter P. In the past there were the portraits of the kings of Poland under the wooden ceiling. On the left, there is also a hall which used to be a library. There is a beautiful wooden fireplace, reconstructed fabric wallpaper, wood panelling and stuccos on the ceiling. On the right, there is a chamber in the rococo style where you can see reconstructed fabric wallpapers and stuccos on the ceiling. Then, you enter the round room (blue one-unjustifiably called chapel) with the reconstructed claret niches where the copies of antique statues. There are also fireplaces made of white marble.
When you go straight, you can see a square room and bedrooms. These rooms fulfilled a boudoir function to the mistress.
On the left, there is the owners bedroom divided by gold columns into two parts. There is still a tiled stove decorated with scion elements.
This room leads to the bathroom and there is also a way a study with a fabulous fireplace made of black marble.
On the first floor there are rooms devoted to the family and guests. All rooms on the ground and first floor were decorated in the neo-Gothic style. At present these rooms are not used.
First, the Będlewo Palace had balanced ventilation heating, then at the beginning of the XXc. heaters were installed.
The palace is surrounded by the park which covers about 9ha. It is a park in an English style which joins the elements of the forest. There are unique trees protected by the law. The palace is surrounded by a marble fountain, two lakes and the terrace full of flowers. On one lake there is an island with a romantic grotto. It was believed that there was a chapel. Fifteen years ago there was also a pheasant farm.
Bolesław Potocki was an interesting person. He did not lead a happy life, his life was miserable. His brothers died when he was very young. He became widowed early. Then, he got married again. Felicja, Bolesław’s daughter from his second marriage and Alfred Miączyński, Bolesław’s grandson illicited love affair. It caused furore. Maciej Mielżyński, betrayed by his wife shot both of them in the palace in Dakowe Mokre.  He did not carry any can for this deed, he was overturned by the court. It was claimed that Maciej sprang to his family honour’s defence. There appeared the legend about the BLACK LADY who roamed in the palace at nights. Some workers admitted that they had seen her.
In 1939 Będlewo was ruled by Elżbieta from Miączyńscy Ledóchowscy family. During the war the palace functioned as a residence to the crowd commissioner which aimed at preserving German nation. German painted the polychromes in the Knightly hall and destroyed the portraits of Polish kings and all the decorations. After the war, all the riches were inherited by the public treasury. A cinema and different schools were located in the palace. There were many reconstructions of the palace.
In 1976 the Polish Academy of Sciences from Poznań captured  the palace and it was introduced as the Creative Work Centre.
At the turn of the 70s and 80s the Palace was decorated by the Monuments Maintenance Studio. The polychromes were introduced, the dry rot was eliminated, the roof was covered with the cupreous sheeting.
In 1996 the Palace was inherited by the Mathematical Institute of the Polish Academy of Sciences.
The conference centre was funded and it developed very fast. In 1997 the hotel part was built, then the lecture room, the farm entrance (the building with the reception and a tower with the bell), courtly outhouse and the stable appeared. The lakes and the ponds were cleaned. Now the Palace functions as a Mathematical, Research and Conference Centre in the Polish Academy of Sciences. There are only three such places in Europe. The Będlewo centre is the biggest one where 150 people can be seated. Our palace was visited by many well-known mathematicians, artists, politicians and contractors. Our guests’ satisfaction is for us the biggest recommendation and allows us to organize following meetings.